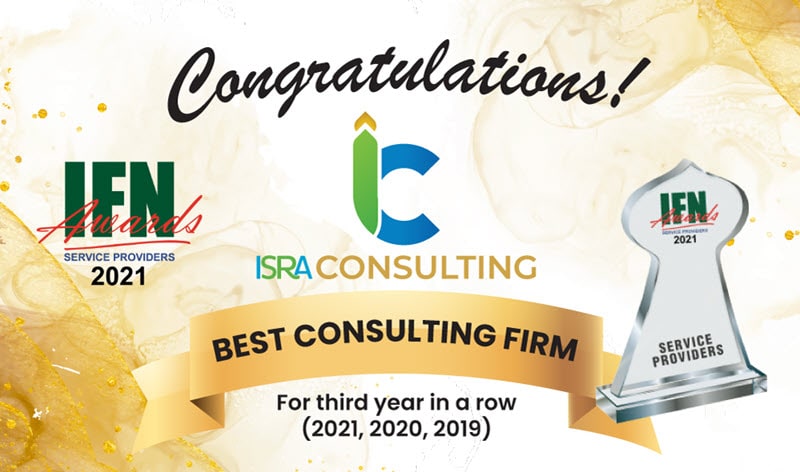 Kuala Lumpur, 20 Oct 2021 – ISRA Consulting, the consulting subsidiary of INCEIF, is voted as the Best Islamic Consulting Firm for the third year in a row in an international poll conducted by leading Islamic finance news portal, Islamic Finance News (IFN).

The consultancy category received the third highest total number of votes. The IFN Service Providers Poll, in its 16th year, is unique in its recognition of the vital role that third parties and service providers play in smoothing the path for Islamic finance and setting the benchmark for its ongoing quality, consistency and creativity by supporting the underlying operations that are crucial to its success. And in a crisis-filled year that has been challenging for so many, these achievements were all the more impressive, IFN said.

The tumultuous past 12 months have seen some surprise shake-ups on the scene, with the emergence of new winners in some of the most closely-fought contests, while other players toughed it out to hang on to their title even in the midst of adversity. As the industry rapidly recovered and post-pandemic normality began to resume, this year’s poll received even more votes than previously, across its nine categories which showed the importance that these providers hold in the eyes of the industry, IFN added.

ISRA Consulting has prepared Islamic finance related acts and guidelines for a number of countries and central banks and conducted Shariah review and audit exercise. In over a decade, it has built a strong network both locally and globally with its strategic alliances as a group under INCEIF and ISRA (International Shari’ah Research Academy for Islamic Finance) as well as its affiliation with Bank Negara Malaysia.

ISRA Consulting was also recently awarded the “Best Consulting Service” by The Asset Triple A Islamic Finance Awards 2021, another triple year record. The Hong Kong-based The Asset is a widely recognised business news and research organisation.

ISRA Consulting CEO Prof Dr Ashraf Md Hashim said: “First and foremost, Alhamdulillah. I am also taking this opportunity to thank all our clients around the globe that have given us the opportunity to serve them. The award also goes to all IC staff for their hard work, and the INCEIF and ISRA staff at large for all their support. Indeed, the award has boosted our spirit to work harder and to always deliver the best, InShaAllah.”