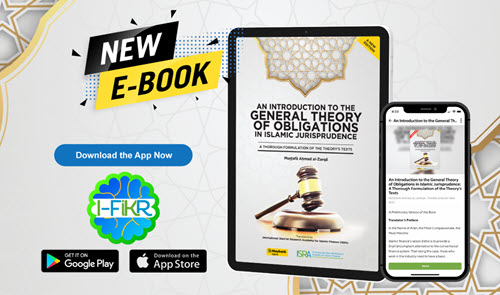 Kuala Lumpur, 7 Oct 2021 – ISRA today launched an e-book, An Introduction to the General Theory of Obligations in Islamic Jurisprudence, an English translation of the Arabic language work by one of top 10 Islamic scholars of the 20th century, Professor Mustafa Ahmad al-Zarqa.

Published by ISRA and sponsored by Maybank Islamic Bhd, the e-book is available through premium subscription on the I-FIKR App.

Maybank Islamic Deputy CEO Nor Shahrizan Sulaiman said the book presented ground-breaking ideas relating to the theory of obligations and other intangible properties, which have stimulated discussions and debates among Muslim jurists and Islamic finance practitioners until today.

“This is what contemporary academic research demands. I am confident that this effort will contribute significantly to the English language literature on Islamic banking. Maybank Islamic Centre of Excellence’s mission to enhance Islamic finance literacy and understanding in the local and global arena is reflected in this translation initiative. At Maybank Islamic, we believe that Islamic finance industry will continue to thrive through high quality research and publication, and to achieve this milestone, we are working collaboratively with prominent researchers and institutions, locally and globally,” Mr Nor Sharizan said at the virtual launch of the e-book held during ISRA’s 16th International Shariah Scholars Forum recently.

The two-day virtual forum was attended by over 200 participants including from the Middle East, Africa and South Asia.

“The translation of this seminal 20th century work will definitely be of tremendous benefit to university lecturers, researchers, students and industry practitioners. In fact, members of the public who want to understand the philosophy of the Shariah regarding rights, obligations and properties may also find the book useful,” she added.

The book systematically outlines the Shariah’s system for regulating the rights and responsibilities that arise from human dealings, particularly with regard to property, and enriches the discussion by comparing the Shariah concepts with their parallels in secular law.

Sheikh Mustafa al-Zarqa’s innovative and advanced thoughts in the realm of muamalat (transactions) can be witnessed in his elucidation of intellectual properties and other intangible assets, which were the outcome of his distinct ability to marry the classical fiqh corpus with an apt understanding of modern transactions.

The book was translated into English by ISRA’s team of four experienced translators, two editors and four reviewers with expertise in fiqh, usul al-fiqh and disciplines related to Islamic finance.