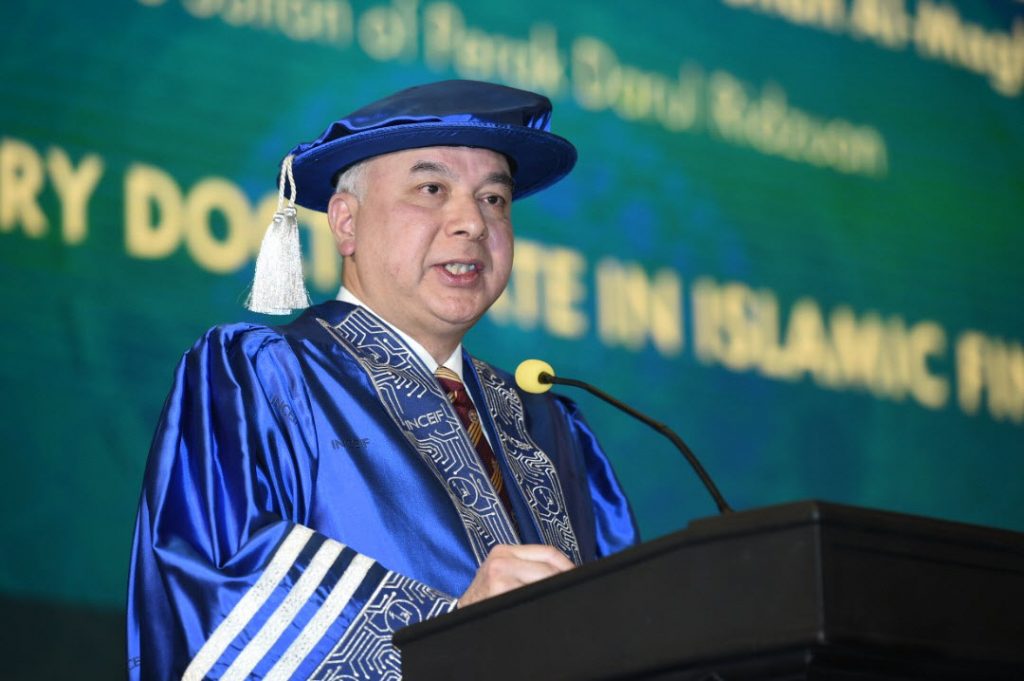 Kuala Lumpur, 7 December 2019 – His Royal Highness Sultan Nazrin Muizzudin Shah Ibni Almarhum Sultan Azlan Muhibbuddin Shah Al-Maghfur-Lah, The Sultan of Perak Darul Ridzuan, was conferred with an Honorary Doctorate in Islamic Finance by INCEIF today in recognition of his contributions to the growth and development of Islamic finance in the domestic and global financial arena. The Doctorate, conferred at INCEIF’s 11th Convocation, is the first Honorary Doctorate to be accepted by Sultan Nazrin from a Malaysian university.

In his royal address, Sultan Nazrin stated that as Islamic finance continued along unprecedented growth and development over the past three decades, the industry was venturing into new frontiers to bring greater value to the economy, to society, and to the environment: the so-called “Three Ps” of planet, people and prosperity.

“It is my belief that Islamic finance has the potential to make a significant – even vital contribution to redressing these serious shortfalls (in the economy, society and environment). At its core, Islamic finance is based on principles that emphasize, among other objectives, equitable risk-sharing and inclusiveness. It also requires Shariah-compliant transactions to be based on real, productive assets. All of these principles promote fiscal responsibility and sustainability, meaning that the industry is well-placed to withstand economic turbulence and provide reliable, long-term solutions to alleviate poverty as well the climate and humanitarian crises,” he said.

Sultan Nazrin added that given its own ideals and social objectives, it seemed only fitting that Islamic finance should play an important part in contributing to this process of “reinvention”, from shareholder to stakeholder capitalism.

“Strikingly, the notion of stakeholder capitalism is already, independently, moving towards many of the elements of Islamic finance, emulating its principles of risk-sharing, inclusiveness, and more secure, reliable investment models,” he added. 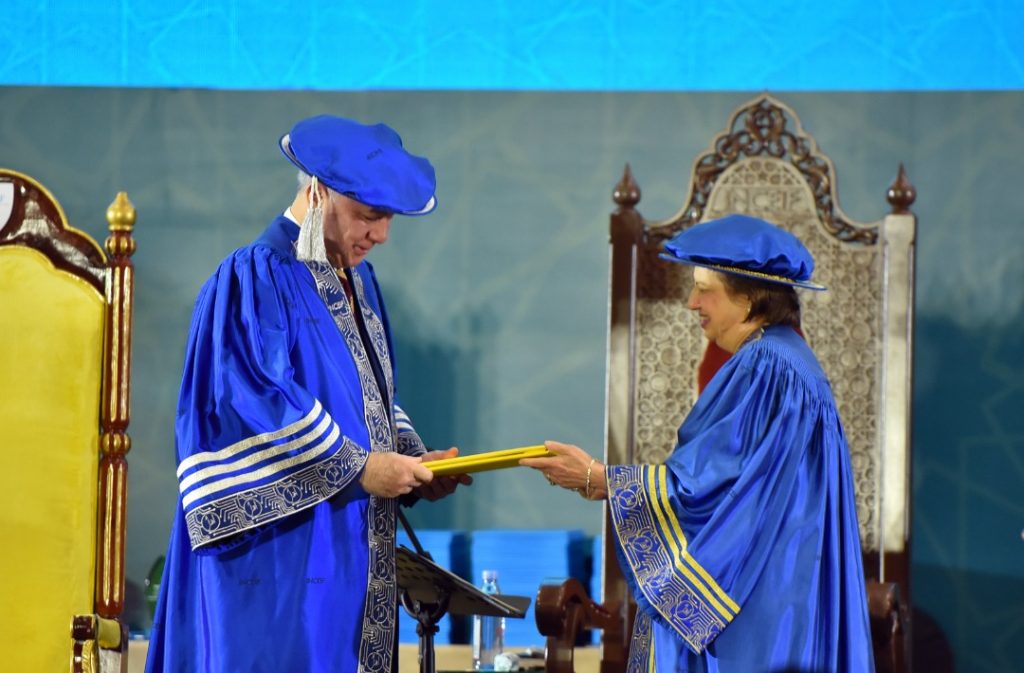 In closing he said he was truly so grateful for the honour of being inducted into INCEIF.

“There is, as I have said already, much more work still to be done. The world is in desperate need of a more sustainable, responsible financial system that promotes social and environmental concerns, and Islamic finance must step up to meetthis need. And who better to innovate, propagate, regulate and advocate for Islamic finance than those of us assembled in this hall today? That is the responsibility which I humbly accept along with the honour of this recognition this morning, and I am optimistic about the fact that each one of you here will be doing the same.”

(Click here for the full speech of Sultan Nazrin.)

Sultan Nazrin is widely recognised as one of the intellectual leaders of Malaysia and the voice of a moderate, progressive Islamic society. He graduated with a Bachelor’s degree in Philosophy, Politics and Economics from Worcester College, Oxford and holds a doctorate in political economy and government, and an MPA (Master of Public Administration) from Harvard University. In academia, his contribution includes his service as Chancellor of the University of Malaya, attending conferences and giving public lectures on a range of topical issues. On 29 May 2014, Sultan Nazrin was proclaimed the Sultan of Perak following the demise of his late father, Almarhum Sultan Azlan Shah.

Known for his active interest in economic and political development in Southeast Asia, Sultan Nazrin is widely sought after as a speaker at local and international conferences.  With the authority of an accomplished scholar, he talks on subjects including education, religion, the role of constitutional monarchy in Malaysia, and economic development. He consistently argues that Islamic social finance provides an innovative way to support global humanitarian programmes, magnifying the impact of zakat, which is a fundamental tenet of Islam.

Sultan Nazrin continues to present the case for Islamic finance as a means to further United Nations Sustainable Development Goals agenda of alleviating poverty and inequality, while maintaining and improving global prosperity and stability. He has authored two books, “Striving for Inclusive Development: From Pangkor to a Modern Malaysian State”, and “Charting the Economy: Early 20th Century Malaya and Contemporary Malaysian Contrast”.

The diversity of INCEIF graduates affirms the university’s role in developing world-class talent for the global Islamic financial services industry and reinforces Malaysia’s position as the global hub for the industry. Bank Negara Malaysia Governor Datuk Nor Shamsiah Mohd Yunus, who is the Chairman of INCEIF Board of Directors, and Dr Rozali Mohamed Ali, Pro-Chancellor of INCEIF, were also present at the ceremony.

In acknowledgment of their academic excellence, the recipients for the President’s Award were:

Eunjoo Lee said: “It was a great challenge for me to study Islamic finance as a non-Muslim student who does not have any background knowledge. However, INCEIF programmes provided me with valuable knowledge and helped me to have a broader view of the field. I am thankful for the support and assistance from the professors at INCEIF that encourages me to complete the programme and I am now closer to my ultimate goal”.

In addition to these awards, for the first time, INCEIF has introduced the `Book Award’ at this convocation. Recipients of the award were graduates who excelled in selected domain of knowledge. The recipients were:

In his speech at the convocation, INCEIF President & CEO Professor Dato’ Dr. Mohd Azmi Omar said, “INCEIF has received acknowledgements from numerous organisations here and abroad as a reflection of the quality of our faculty, alumni and research. In November last year, our academic programmes attained the stature of being among the top five percent of business programmes in the world with the AACSB accreditation. INCEIF is the fifth and the only Islamic finance focused university in Malaysia, to be accredited by this international accreditation body.”

He further stated, “We are in a new era in Islamic finance, driven by a global appetite for socially responsible and ethical investment created by the push from UN Sustainable Development Goals. Doing ‘good for the people and the planet’ is the new investment mantra. For Islamic finance, though, these values-driven instruments are not new as they are the raison d’être of the system. At INCEIF, we will continue to work with a diverse group of collaborators, both local and international, to develop Islamic financial tools that are responsible and serves to provide positive socio-economic impact”.

Upon congratulating Sultan Nazrin on the royal conferment and the graduates of INCEIF’s 11th Convocation, he reaffirmed INCEIF’s commitment to improve continuously on its industry focus, global reach and the quality of the academic programmes and research.

(Click here for the full speech of Dato’ Azmi.)