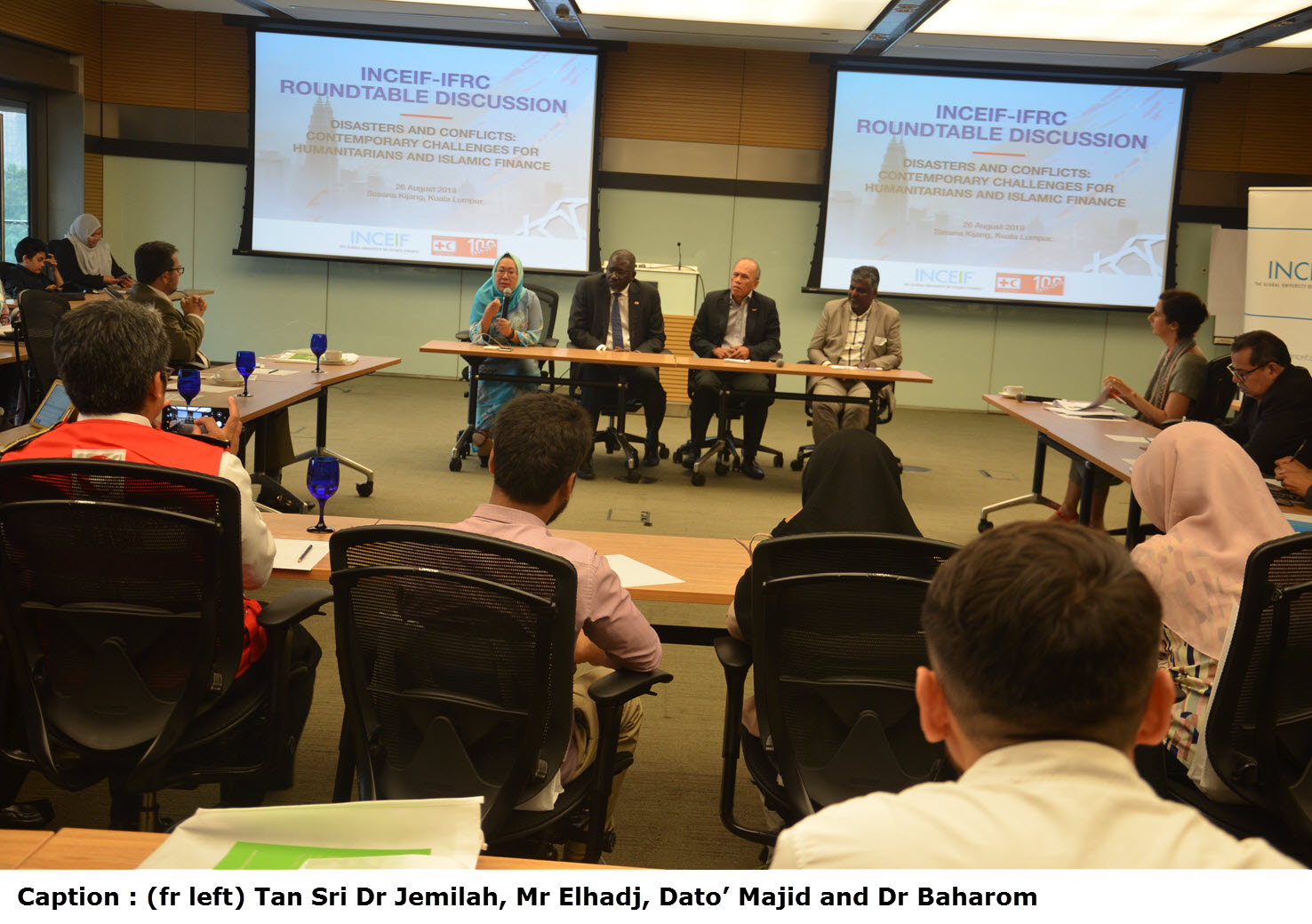 Disaster and conflicts: Contemporary challenges for humanitarians and Islamic finance

Kuala Lumpur, 26 Aug 2019 – “Too many, too often and too severe,” said The International Federation of Red Cross and Red Crescent Societies (IFRC) Secretary General Mr As Sy Elhadj when giving a quick update on the situations in conflict and disaster areas in the world.

In addition to natural disasters, the never ending conflict in Afghanistan, Democratic Republic of Congo, Central Africa and Palestine has resulted in increasing numbers of refugees in refugee camps, “where these people not only lose their material belongings, but more importantly their human dignity,” Mr Elhadj said at a roundtable organised by INCEIF and IFRC on `Disaster and conflicts: Contemporary challenges for humanitarians and Islamic finance’.

“IFRC works with the biggest constraint in a very challenging abnormal conflicts and disasters environment, accompanied by high risks which led to loss of life of IFRC staffs and volunteers. In facing disaster, we need to be prepared to enable the community to endure the shocks, in terms of early responses and focus where it matters the most such as at the local level.

“This requires multi sectoral approach, intervention and collaboration with others. That is why we are working with INCEIF to look into ways how Islamic social finance (ISF) can mitigate the complex issues brought about by these conflicts and disasters,” Mr Elhadj added.

IFRC Under Secretary General for Partnerships Tan Sri Dr Jemilah Mahmoud, who was one of the panelists at the roundtable, said one of the challenges in promoting Islamic social finance was the need to “tell the story better, and to demonstrate that Islamic finance is for all.”

One of the ISF instruments, zakat (alms-giving), should be seen as a transformative tool, and be more than just an act of charity. It should be seen as a means to assist people in becoming more resilient and subsequently, be able to give zakat themselves.

Safe and clean water remained out of reach to 800 million people while 2.3 billion people do not have access to proper toilets. To address these major challenges in providing humanitarian aids, zakat, sadaqah (voluntary charity) and waqf (endowment) should be blended with other sources of funds such as trust funds and Sukuk, Tan Sri Dr Jemilah added.

Towards that end, INCEIF has actively embarked on initiatives to encourage policy change to directly impact the social well-being of the society by utilising Islamic finance percepts as set out by Maqasid al-Shariah (the purposes and objectives of Islamic law).

In Malaysia, INCEIF is working with Malaysian Red Crescent to look into ways to be better prepared in handling crisis caused by natural disasters such as floods in the East Coast.

“How can we combine waqf, zakat and sadaqah, and mobilise the funds and assets under these instruments prior to a disaster? For instance, we can look into using idle waqf land on higher ground to give a proper temporary shelter to house the people, their property and livestock, even before the yearly flood strikes,” said Dr Baharom.

Another challenge is the insufficient guidelines on aid allocation.

“Currently, there is too much filtering before the fund reaches the victims. In some cases, interventions by individuals or organisations with personal interests have resulted in aids being channeled according to their respective preferences – sometimes to the extent of excluding the real victims,” said Dr Baharom.

Etiqa Takaful Berhad Chairman Dato’ Majid Mohamad, the fourth panelist, shared an example of how working closely with the direct beneficiary of the aid, in this case the local community, and local NGOs, enabled a sanitation project to be carried out successfully.

“Zakat funds were utilised by the NGOs to process the water from Sungai Rajang in Sarawak into clean water for the use of a number of households along the river. Working closely with the local community resulted in the project being completed at a much cheaper cost of RM300,000 compared with the estimated construction cost of RM1.3 million if we were to be hands-off from start to finish,” he added.

On VBI (Value-based Intermediation), Datuk Majid said: “The Takaful industry joins the banking industry in embracing VBI. For example, we do not provide Takaful coverage for harmful activities such as businesses that have to do with weapon dealings, or those that damage the environment.”

INCEIF has the privilege of co-chairing the VBI Assessment Framework Taskforce (VBIAF) with the Islamic Banking and Takaful Department of Bank Negara Malaysia (BNM). The VBIAF Consultative Document was drafted by INCEIF in collaboration with BNM, the World Bank and World Wildlife Fund Malaysia. It was released in October 2018 for feedback from the public.

Markets are beginning to respond to calls for financial services that are responsible and provide positive socioeconomic impact. Malaysia’s VBI strategy, driven by BNM (regarded as a global exemplar in the dual-banking system) is expected to move the Islamic finance industry into the next phase of sustainable economic development.