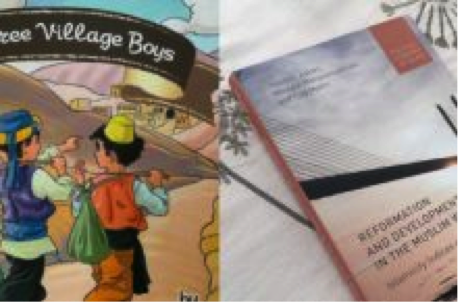 Reformation and Development in the Muslim World, Islamicity Indices as Benchmark was co-authored with Hossein Askari and Hossein Mohammadkhan. This book explores how the recent development of Muslim countries as a group has fallen far short of non-Muslim countries, which, some have concluded, may be a result of Islamic teachings. The authors examine Muslim countries over time, viewing their progression on the Islamicity scale. They assess why some countries have done better than others, and to derive useful policy recommendations to improve political, social, human, governance and economic performance. The book provides Muslim countries a benchmark for their individual development and for the progress in institution building and policies. It also makes suggestions on how to develop the institutional structure for effective economic, social and political reform.

The second book, The Three Village Boys which is an illustrated children’s book was written with the objective to remind the young generation that there is a bigger purpose in life.

Dr Liza, who is a mother of three, hopes that the book could be help a parent and child to have guided conversations about morals, social justice and ethics.  “I believe that morals must be taught to children at an early stage of life. Good values being instilled on our children at an early age will help build a strong society for the next generation. I wrote this book for two main reasons. One is to expand the children’s imagination and pique their curious mind as they go through the adventure together with the characters of the three village boys named Youssef, Zayyed and Omar. And the second reason is to introduce issues such as income disparity and unjust actions inflicted on citizens. I hope that the narrative of the book could help parents guide their children to understand the matter and try make a difference.”

The Three Village Boys, a 26-page book, is enhanced with colourful illustrations to make the story telling journey more memorable and enjoyable. The first edition of the book was published in 2012 and is available on the Amazon UK, US and Barnes and Noble stores for the international market. The current edition, with upgrade to hardcover is now available for online purchase at www.thetvb.com.

At the book launch in Kuala Lumpur recently, activities such as story-telling, sand art and tarbush hat decorating were also organised. The launch was graced by INCEIF First Holder of Islamic Finance Chair, Prof Abbas Mirakhor.