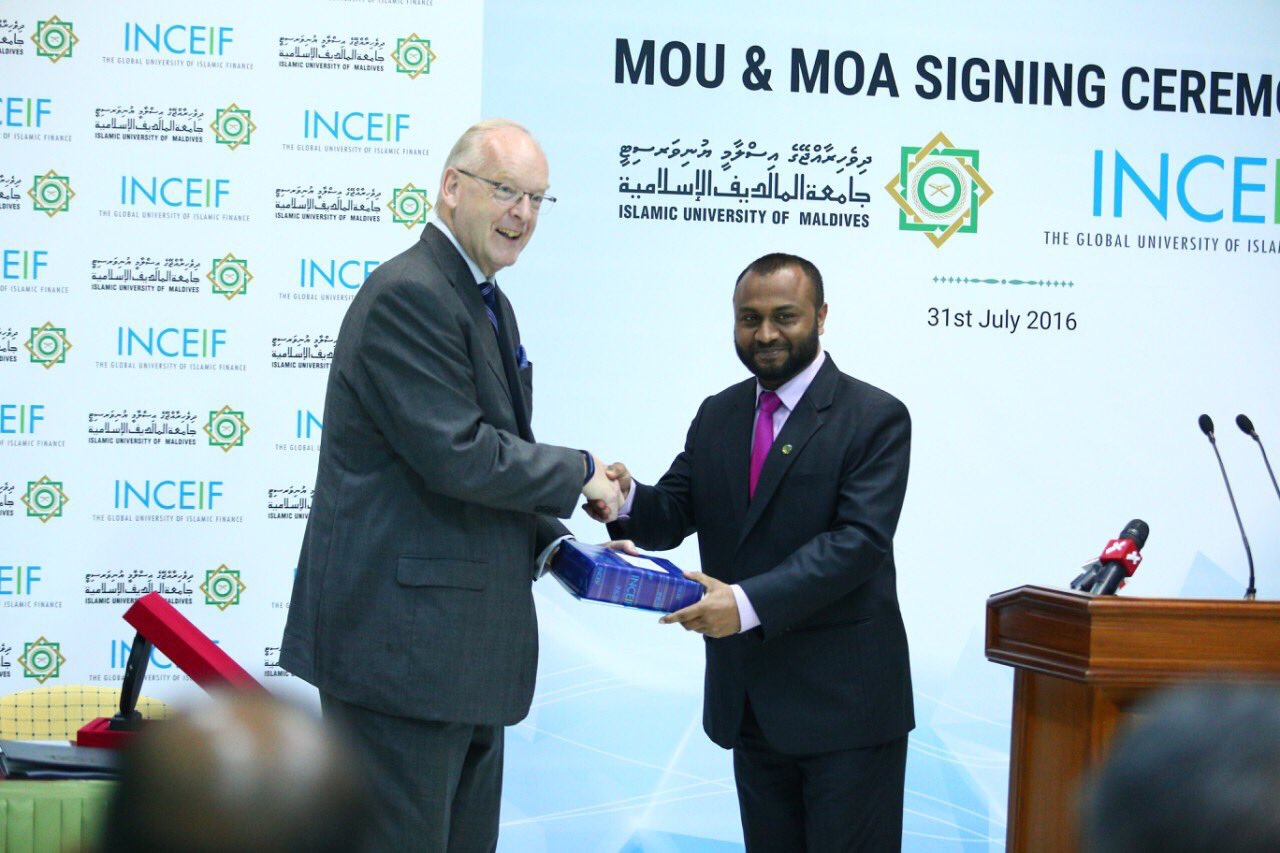 INCEIF signs MoU and MoA with Islamic University of Maldives

31 July 2016, Male, Maldives – INCEIF has further strengthen its effort in promoting Islamic finance knowledge in Maldives when it signed a MoU and MoA with Islamic University of Maldives (IUM).

The signing paves the way for closer and more significant collaborations between INCEIF and IUM, particularly in promoting activities related to the development and expansion of knowledge in Islamic finance.

Mr Daud said INCEIF was honoured to be given the responsibility to contribute towards the enhancement of IF knowledge in Maldives together with the country’s premier university, IUM.

INCEIF PCEO Mr Daud Vicary and IUM Vice Chancellor Dr Mohamed Shaheem at the signing of the MoU and MoA.

Since Sep 2014, INCEIF and Maldives’ Capital Market Development Authority in collaboration with IUM have been offering an opportunity for Maldivians to pursue the Masters in Islamic Finance Practice in Male, Maldives. To date, there are 18 students pursuing the MIFP under this programme. The first batch of students are expected to graduate at the end of the current June 2016 semester.

On 20 July 2016, INCEIF has the honour of hosting the Minister of Education of the Republic of Maldives Dr Aishath Shiham on campus for an official visit. The visit was to further strengthen the collaboration between INCEIF and Maldives which sees the university playing a significant role in delivering Islamic finance knowledge to Maldivians in their country.

During the visit, the Minister had a meeting with the INCEIF management as both seek to further the collaboration including the possibility of the Maldives government offering scholarships for its citizens to pursue INCEIF’s academic programmes.

In April 2016, a high level delegation from Maldives was in Kuala Lumpur for bilateral meetings to seek technical assistance to develop the newly established Maldives Centre for Islamic Finance, an entity that was established with the objective of strategising and promoting Maldives as the hub for Islamic finance and the Halal industry in South Asia.

Maldives is a 100% Muslim country but Islamic finance is still a new concept in the country. In 2003, when Amana Takaful Maldives started its operations, Takaful was introduced and it took eight years for the country to establish the first Islamic bank which is jointly owned by the government and the Islamic Corporation for the Development of the Private Sector, the private sector arm of the Islamic Development Bank.

The country also established an Islamic capital market framework with their own Shariah screening methodology. The first corporate Sukuk of the country was issued in 2013 by Housing Development Finance Corporation while the government has also issued private Sukuk and Islamic treasury instruments since 2013. Over the past five years, the growth of Islamic finance in the country is commendable as there are now 13 financial institutions offering Islamic products in the country, reflecting the demand and practical viability of Islamic finance.