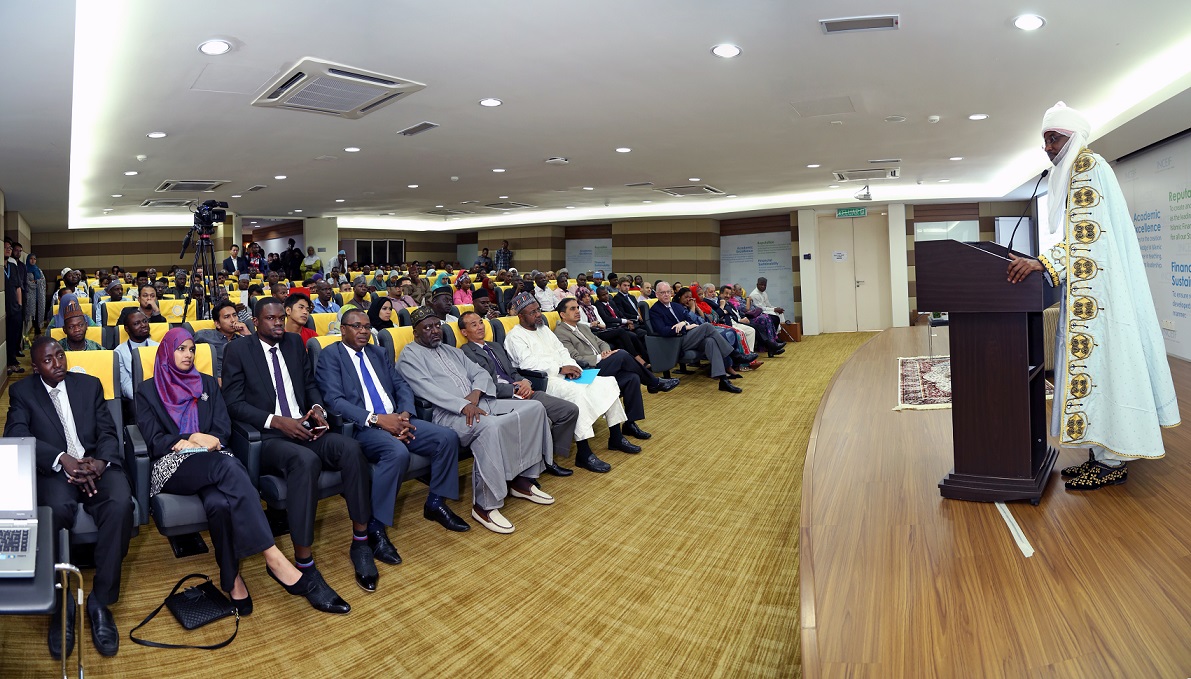 The Emir of Kano : Pursue the knowledge, the job will follow

Kuala Lumpur, 31 March 2016 – The Emir of Kano His Royal Highness Muhammadu Sanusi II, who was also the former Governor of the Central Bank of Nigeria, advised students who worry about job placements upon graduation to concentrate on completing their study instead of being distracted by their next move.

“Seek knowledge and the job will come. It is what you graduate with that is important, the job opportunities will follow suit. When I wanted to study Shariah and Islamic Studies in Sudan in 1997, an acquaintance said to me, not to bother because I would not be able to find a job with that degree. I was in my final year when I met someone at a social event who asked me to give him a call once I was back in Nigeria because he has a job waiting for me. My point is you can’t go wrong with knowledge. The only thing worth pursuing in life is knowledge. In my life, and I have been through many cycles to date, the two years that I spent teaching (at Kano’s Ahmadu Bello University in 1983) were some of my best years. Imparting knowledge and seeking knowledge should be a life-long pursuit. And one should seek knowledge to build competence rather position and affluence. A country may set up institutions with the most power, best processes or armed with best legal system to oversee matters on economy, finance or governance but quality institutions without quality people would be rather pointless,” said The Emir during a Q-and-A session with INCEIF students and faculty on campus today.

Earlier, The Emir spoke on `The Future of Responsible Islamic Finance’ from the perspective of a Ruler and a former Central Banker during a Special Session with INCEIF. In his talk, he said: “It is very important for us to remember that finance does not exist in a vacuum and you can’t have responsible finance in an irresponsible economic and political environment. Behind every bank failures, there are people who suffered as a consequence of the irresponsible act by banking professionals. Children who have to be taken out bridal jewellery of schools when their parents no longer have the money to pay for their education. Or people who lost their homes when banks foreclosed their home loans. Or even in some cases, when they can’t even put food on the table when all their life savings were wiped out by the bank failures.”

Sharing his experience as the Central Bank of Nigeria Governor (2009-2014) when Nigeria faced a financial crisis in 2009, The Emir said: “It is not just about complying to IMF (International Monetary Fund) rules or ensuring that the national currency is protected at all cost. Some people think that defending the currency is like defending your national flag. To me, the people’s welfare should be of utmost importance. As a regulator, I can’t transfer the massive shock to the financial system which was triggered by the irresponsible act of a small group of people to the masses who were facing a life-and-death situation. Are decisions being made for the real people or for a small number of elite powerful people? Once I knew what I had to do, I pursued that option even though we had to face powerful people along the way to set things right. For me, I have chosen to be remembered as someone who spoke the truth to those who hold the power.”

The Emir was in Kuala Lumpur as a keynote speaker at the Responsible Finance Summit which was officiated by Bank Negara Malaysia Governor Tan Sri Dr Zeti Akhtar Aziz. BNM hosted the summit which was attended by more than 400 seasoned regulators and responsible finance pioneers. He is widely respected in many parts of Nigeria, and abroad, as one of the most courageous public intellectuals of recent times. Internationally, he was lauded for the role he played in sanitising the banking sector and stabilising the economy of Nigeria – Africa’s largest – following the 2009 Stock Exchange crash. His governorship of the Central Bank of Nigeria was the envy of many central bank governors around the world when he was able to introduce reforms that many would have liked to see in their own jurisdiction. During his tenure as Governor, he sent shockwaves throughout the corporate establishment, sacking the chiefs of eight of the banks and felling pillars of Nigeria’s financial aristocracy who had long seen themselves as beyond the reach of the regulators in doing so. The global financial intelligence magazine, The Banker, published by the Financial Times, has conferred on him two awards: the global award for Central Bank Governor of the Year and for Central Bank Governor of the Year for Africa (2011). TIME magazine also listed him among its 100 Most Influential People of 2011.