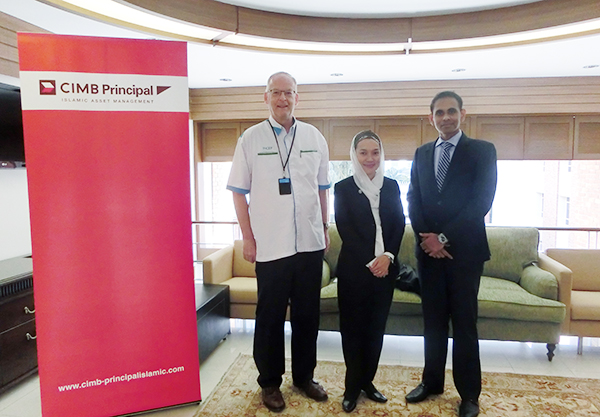 Kuala Lumpur, 12 Feb 2016 : INCEIF students today got the invaluable tips and information on preparing themselves for a career in Islamic banking and asset management from two of the biggest players in town, CIMB-Principal Islamic Asset Management (CPIAM) and CIMB Islamic Bank.

During an interactive session between CPIAM CEO Datin Seri Norashikin Mohd Kassim, CIMB Islamic Senior Managing Director & Deputy Chief Executive Officer Mohd Shafri Shahul Hamid and the students on campus today, audience were offered a glimpse of the fast pace developments in the day-to-day operations of the two institutions. They also were briefed on the knowledge and job skills that employers look for in their employees.

“We look for a candidate who is not only well-versed in Islamic finance but also knowledgeable in conventional finance practices. Even though you may work for an Islamic bank or asset management company, you also need to liase with stakeholders or colleagues from the conventional side. We operate in a dual system, Islamic and conventional. Anything that affects the conventional markets would also have spill over effects on the Islamic market,” said Shafri during the inaugural `Take A Step Closer: Career in Islamic Finance’ workshop jointly organised by CPIAM and INCEIF.

He added that the global Islamic finance market was always on the look-out for experienced or senior staff and as a result, Islamic financial institutions in Malaysia do see a turnover in staff when they left for banks in the region or in the Middle East.

However, both Datin Seri Norashikin and Shafri emphasised that there was no `manual’ for an Islamic finance professional. “You have your foundation in Islamic finance which you learnt at university. The rest, the big chunk of it, will be the lessons learnt or experienced on the job. You should also be able to link or find the possible link between whatever developments in the world markets and your own day-to-day operations. You should be able to link between the theories that were taught to you and the real situations you faced at work.”

The CIMB Group has been employing INCEIF graduates over the years. At the workshop, two INCEIF alumni who currently works within the group, Malaysian Nu’Aim Kaz Ahmad and Germany national Frank Robin Winkler, shared their experience to date.

INCEIF President & CEO Daud Vicary Abdullah in his closing remarks at the workshop thanked CPIAM and CIMB Islamic for their involvement in the workshop. This is because such collaborations between INCEIF and  industry players were invaluable lessons for the students in preparing for the working world. Due to the good response from both CPIAM and CIMB Islamic, students can look forward to more similar workshops in the near future.