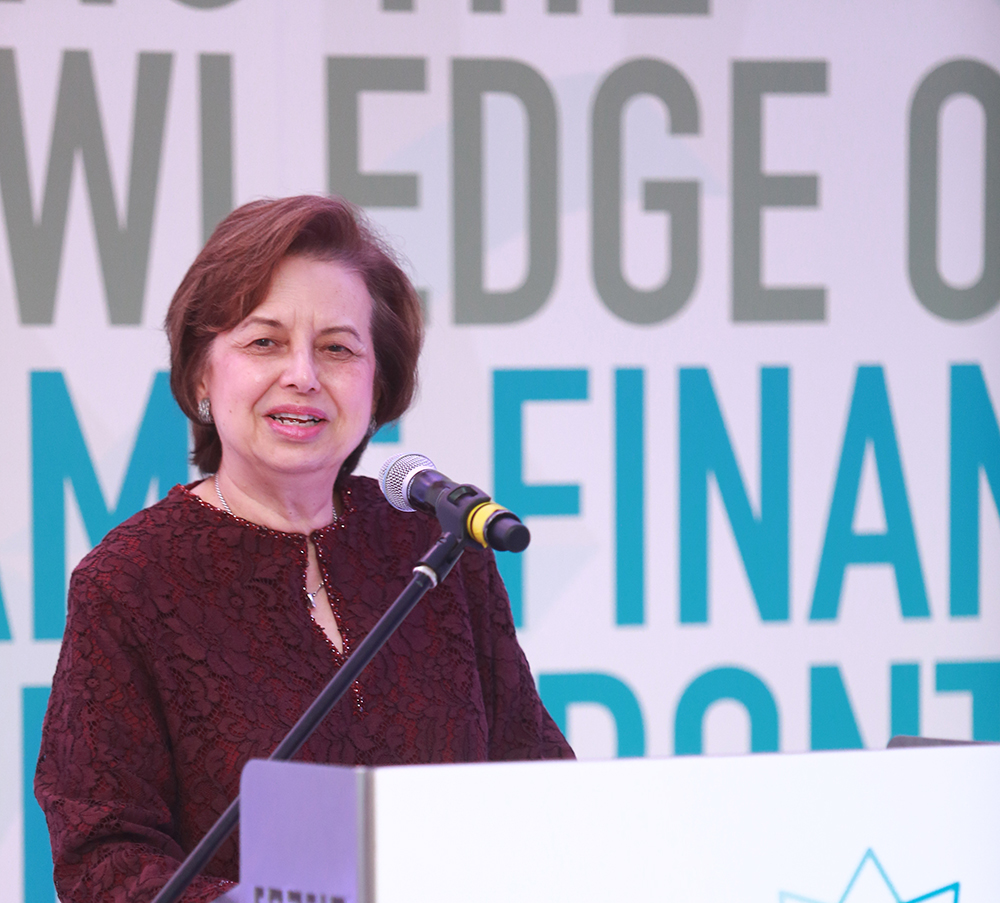 In conjunction with INCEIF’s 10th Anniversary we are most honoured to be graced by the presence of His Majesty the Sultan of Perak Darul Ridzuan Kebawah Duli Yang Maha Mulia Paduka Seri Sultan Nazrin Muizzuddin Shah to celebrate the occasion.  His Highness will also graciously officiate the launch of the INCEIF Endowment Fund, an initiative by INCEIF to strengthen its potential to serve the Islamic finance industry in the global financial system. In the decade since its establishment, INCEIF has achieved several milestones not only in producing talent for the industry but in research that has pushed the frontiers in the development of Islamic finance. The success of INCEIF is indeed a celebration and a reason for us to pay tribute to INCEIF and to the industry that has provided its undivided support to INCEIF.

Islamic finance has continued to experience profound growth amidst a highly challenging global economic and financial environment.  Additionally it has evolved as a sustainable form of financial intermediation that is now widely accepted and operationalised in many parts of the world. In Malaysia, the Islamic financial system has become a competitive component of our overall financial system, complementing the conventional financial system and supporting our economic growth and development. The growing market share of Islamic banking assets from only 7 percent in the year 2000, to now more than 26 percent of the total banking system signifies the growing significance of the industry. The takaful industry has also been on a positive growth trajectory with market share of takaful assets increasing by more than twofold from the year 2000 to now 10 percent.

Talent development has been at the heart of our development strategy for Islamic finance from the very beginning. We recognised at the outset that quality talent and expertise was an important prerequisite in driving, sustaining and supporting the growth of the industry. Intellectual capital is a pivotal defining factor that drives performance and market competitiveness.  As articulated in our vision in our ten year Financial Sector Master Plan (FSMP) which was launched in 2001, the aspiration was for the industry to achieve a target of 20 percent share by 2010 for the Islamic banking and takaful sector. In achieving this envisaged growth, a key recommendation was to enhance knowledge and expertise in the industry through human capital development, and thereby enhancing the institutional capacity of the industry.

The commitment from the Central Bank not only to develop the Islamic financial infrastructure – the intermediaries – the markets, the legislation, the regulatory, supervisory and Shariah framework but also to ensure that it would supported by knowledgeable and competent talent.  This agenda began with the setting up of a dedicated department for Islamic Finance in the Bank in the year 2001 to drive this development.  It was during that year that discussions began on the establishment of a dedicated higher learning institution for Islamic finance.

The aspiration of the founders of INCEIF was to establish a post graduate learning institution in Islamic finance that would be at the forefront of producing high-calibre practitioners and professionals in the industry, as well as specialists and researchers in the disciplines of Islamic finance. A decade later, from the establishment of INCEIF in 2005 and conferment of university status in 2006, INCEIF has built a solid international reputation as a leading knowledge leader in Islamic finance, charting its achievements in providing a comprehensive talent management solution for the Islamic financial services industry. Various awards and recognitions received both locally and internationally, as well as recognition from the Government as a ‘Project of National Interest’ in March 2010 has provided greater impetus for INCEIF to enhance its capability in serving the needs of the industry.

The strategic direction reinforced by the visionary global insights on the learning needs of the Islamic finance industry provided by the eminent Governing Council members of INCEIF has been instrumental in positioning INCEIF towards its success. Its profound growth in the number and global composition of students signifies the international acceptance and recognition of INCEIF. The number of registered students in INCEIF has increased by more than threefold from about 600 students from 21 countries in 2006; to more than 80 countries. From the first graduation that I attended in 2009 when there was only 32 CIFP graduates, it increased to 74 CIFP graduates and 7 Masters graduates in just than a year later. There are now more than  one thousand total graduates since 2006 from more than 70 countries. This year’s convocation has the largest number of graduates that INCEIF has produced, with a total of 248 graduates comprising 100 CIFP graduates, 136 Masters graduates and 12 PhD graduates. INCEIF now has a strong alumni with graduates employed in various industries, particularly in finance and placed in senior management positions of financial institutions.

Of equal importance in the development of talent is the development of Shariah experts to uphold the sanctity of Shariah and to ensure Shariah compliance in Islamic finance activities. Driven by this need, the International Shari’ah Research Academy for Islamic Finance (ISRA) was established in 2008 as part of INCEIF, dedicated to conduct in-depth and applied research on Shariah. Within seven years, ISRA has had a global impact. A recent study cited that an estimated 11 percent of global Islamic finance research has been contributed by ISRA and INCEIF. Recognised a leading Global Premier Research Academy in Islamic finance and Shariah matters, the wide-ranging contributions by ISRA include over 200 Shariah research and a number of publications that includes textbooks, journals and research papers that have been referred to internationally. ISRA’s distinct expertise in Shariah research is also leveraged upon by the Central Bank, industry players and various local and international institutions. The intellectual discourses on current Shariah and Islamic finance development organised by ISRA at both regional and international levels have been valuable platforms for Shariah scholars to keep abreast with current issues in the industry and for facilitating greater convergence in diverse Shariah interpretations and views. The i-Fikr Portal is also gaining its popularity as a one-stop online Shariah knowledge repository for research and development in Islamic finance.

The milestones and achievements of INCEIF is a culmination of the collective wisdoms that have charted the path of INCEIF. In a decade, INCEIF has had the opportunity to have experienced individuals ranging from prominent academicians, industry practitioners and subject matter experts as members of its Governing Council. INCEIF has also leveraged on the vast wealth of experience of its academic faculty members, with the largest pool of Islamic finance experts under one roof. It is also an honour for INCEIF to have Dr. Abbas Mirakhor, the former Executive Director of the International Monetary Fund and a renowned Islamic economist as the First Holder of INCEIF Chair of Islamic Finance. With a faculty of such strength, INCEIF has been able to provide its students and graduates with value added insights and perspectives, in particular for their research programmes. The strategy taken by INCEIF to foster close collaboration with various institutions of higher learning has also strengthened efforts in the areas of curriculum development, research, exchange of ideas and information as well as resources in Islamic finance. More practical application of research findings has also been made possible through strategic alliances formed between INCEIF and industry and policy makers. With over 30 Memorandums of Understanding and Memorandums of Agreements signed with various academic institutions around the world, INCEIF has also formed wide ranging global partnerships and strategic alliances which complement its pursuit to provide world-class knowledge for the benefit of the industry.

Taking inspiration from the accomplishments of INCEIF thus far, there is a need to look ahead with a continued focus on how the dynamism of INCEIF can be sustained, taking into account the current changing requirements of talent development and that of the future. Moving forward, we can expect greater challenges ahead for INCEIF as a premier graduate school in Islamic finance. The Central Bank will continue to be committed to support its growth and development and to enhance its potential in providing Islamic finance education and research.

The IEF that will be launched today is structured to be a modern and accessible avenue for members of the industry and the corporate sector to become a part of INCEIF’s future. It is envisaged to create a wider ownership of INCEIF, similar to that of global premier educational institutions. Being part of INCEIF’s talent development, regular progress updates will be provided on the applied research and its other offerings and on the learning experience for its students.

In our quest and shared aspirations for Islamic finance, INCEIF has had a key role in shaping the talent development landscape in both local and global Islamic financial industry, with a decade of achievements that have provided a solid structure for generating quality talent, underpinned with academic innovation and excellence. Let me once again congratulate INCEIF on its 10th Anniversary.  With the collective support from the industry and corporate sector, INCEIF would increase its potential for becoming a reputed knowledge leader in Islamic finance and to be best able to effectively manage its journey ahead to realise this noble vision.