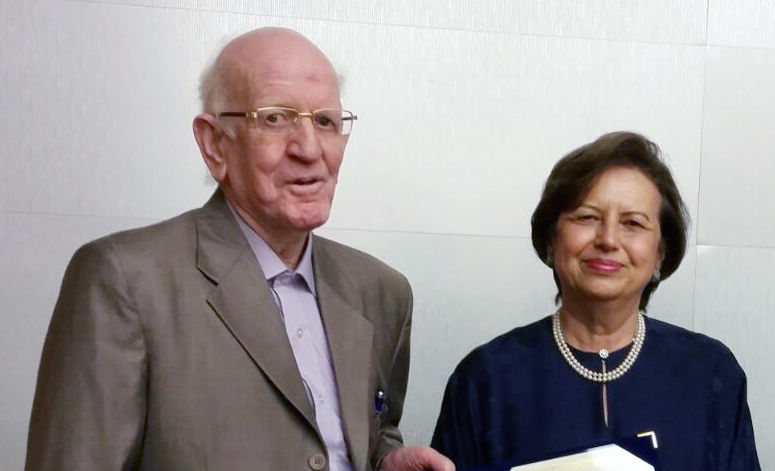 Kuala Lumpur, 4 Nov 2015 – INCEIF has awarded the title Emeritus Professor to Professor Dr. Zubair Hasan, a former faculty member of the university, at its recent convocation. The award, presented by INCEIF Chancellor, Bank Negara Malaysia Governor Tan Sri Dr Zeti Akhtar Aziz, is in recognition of his distinguished service to the university in particular and to the Islamic finance industry in general. This is the first Emeritus Professor from INCEIF.

In his recitation prior to the presentation of the award, INCEIF Deputy President Academic Prof Datuk Dr Syed Othman Alhabshi commended Prof Zubair’s  accomplishments and tireless efforts in the promotion of Islamic economics as well as Islamic banking and finance. The efforts have earned Prof Zubair the prestigious Islamic Development Bank Prize in Islamic Economics awarded by the Islamic Research and Training Institute of the IDB in 2009.

“At 83, Zubair Hasan is still working on his latest book titled “The Theory of Profit from Islamic Viewpoint” to be published by Oxford University Press before this year ends. That probably sums up Zubair Hasan’s untiring efforts to contribute towards knowledge in Islamic Economics, a discipline that is not only very dear to him but has been his passion for the past 40 years.”

Prof Zubair has spent all his working life in universities, starting with Meerut College, Agra in 1957 and ending at INCEIF in June 2015, a total of 58 years. Out of the total 58 years of working life, he spent 31 years in various universities in India, 2 years in Iraq, 18 years in International Islamic University, Malaysia (IIUM) and 7 years at INCEIF. He is currently Chairman of the Shariah Advisory Board for Euronexis Capital Berhad, a company specialising in Private Equity and Venture Capital Advisory.

His involvement in academia allowed him to teach a total of 23 courses and introduced 8 new ones at IIUM. He has also successfully supervised a number of PhD and Masters students. Most importantly he has published 6 books with one more forthcoming, two monographs, 34 articles in refereed journals, 13 chapters in books and presented a total of 43 working papers in various local and international conferences.