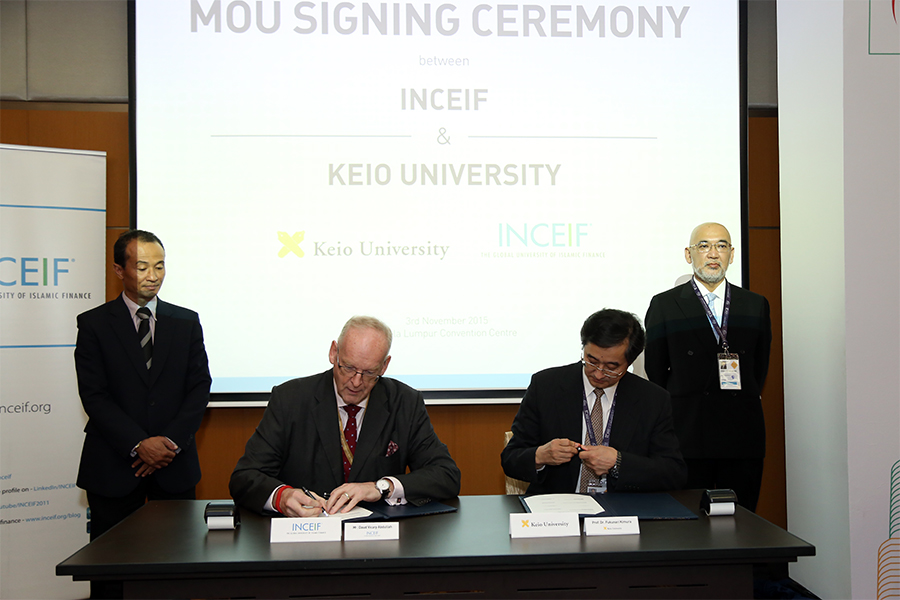 Kuala Lumpur, MALAYSIA – 3 November 2015– INCEIF – The Global University of Islamic Finance – today signed an important strategic MoU with Japan’s Keio University at the World Islamic Economic Forum (WIEF), representing the determination of both in their drive to internationalise Islamic finance and to make it more accessible in Muslim-minority markets where the industry has witnessed substantial growth in recent years.

The announcement of the partnership follows a 3-day visit to Japan earlier this year by Malaysian Prime Minister Dato’ Sri Najib Razak, during which he held meetings with the Japanese Prime Minister and other officials about enhanced cooperation between the two countries, particularly on Islamic Finance. The Malaysian Prime Minister gave a keynote speech at the roundtable meeting of the World Islamic Economic Forum (WIEF) Foundation and Alliance Forum Foundation (AFF) in Tokyo – a forum to help link Japan and the Muslim world.

The introduction of INCEIF to Keio University was made by  Bank of Tokyo-Mitsubish UFJ (Malaysia) in response to the very specific business requirement Japan has to educate its students in Islamic Finance. Since its inception 10 years ago, INCEIF has developed a strong legacy of producing high-calibre and workplace-ready graduates, who have gone on to excel across multiple industries and across markets. In Japan, Keio is regarded as a ‘Super Global University,’ which marks it out not only as an academic centre of distinction, but as a truly international institution, well placed to harness the best global talent in the nation’s pursuit of Islamic finance excellence.

Celebrating the university’s 7th convocation on Saturday 24th October, this year’s INCEIF graduates included students from Muslim-minority countries that included Canada, France, Norway, India, Japan and the United Kingdom – with Japan forecast to become one of the [M.H1] potential emerging markets globally for Islamic finance.  INCEIF President & CEO Mr. Daud Vicary Abdullah explained that the increasing diversity of INCEIF students affirms its role in developing world-class talent for the global Islamic financial services industry and puts Malaysia at the heart of this development.

In April this year, Japan’s financial regulator said it would consider relaxing the rules for domestic banks to use Islamic financial products, potentially opening the world’s second largest bond market to sukuk (or Islamic bonds). The global Islamic finance industry has witnessed a global resurgence over the past decade, with total assets currently estimated at US$2.1 trillion.[1] These investments largely take place on a cross-border basis, reinforcing the need for stronger trade and investment linkages, and regulations, between jurisdictions. Ernst & Young estimates that Islamic banking assets will grow by an average of 19.7% a year through to 2018. Markets such as Japan – which has a growing Muslim population and has introduced new measures to attract and properly regulate Islamic banking – is set to be amongst the most important beneficiaries of that growth.[2] Over the past year, The Bank of Tokyo-Mitsubishi UFJ, Japan’s largest lender, has expanded its Islamic finance activities overseas and in September 2014, Bank of Tokyo-Mitsubishi UFJ Malaysia issued whorld’s first Japanese yen sukuk. INCEIF’s Alumni and students in Bank of Tokyo-Mitsubishi UFJ Malaysia also involved in the deal.

Professor Colin McKenzie, Executive Director of Keio’s new programme “PEARL”, said: “This new partnership couldn’t be better timed for Keio students to study at INCEIF, given both the industry’s meteoric rise, the increasing interconnectivity of Islamic banking with conventional banking and the moves made by both the Japanese and Malaysian Governments to maintain the momentum through relaxing regulations and promotional activities. INCEIF’s world-leading teaching methods, demonstrable experience in making graduates ‘work-ready’ and its advanced interactive Web class system are all advantageous points for our students.”

Mr. Daud, added: “INCEIF’s enthusiasm to admit Keio students stems from our ambition to extend our global presence to Japan. Keio is the perfect springboard on which we can make that vision a reality, harnessing the power of its excellent network and growing the Islamic finance talent of Japan. In addition – it’s through diversification and by expanding our global footprint that we are playing a central role in both growing and developing Islamic finance locally and globally.

Asked about the immediate future for INCEIF and the Islamic finance industry, Mr. Daud announced the launch of its Islamic Endowment Fund (IEF) at the WIEF for the following day, 4th November, to attract the support of everyone who shares the university’s vision for the industry’s future as a global knowledge-leader in Islamic finance. Of the IEF, Mr. Daud, said: “To accelerate our growth of our global role, INCEIF needs to ensure its continuous sustainability. The establishment of a new endowment fund will certainly help INCEIF to continue in our journey, in taking the knowledge of Islamic finance to the next frontier. I would like to thank our esteemed partner, Keio University, our students, alumni, staff, and the global Islamic finance community at large for contributing enormously to our shared vision and shared success to date.”