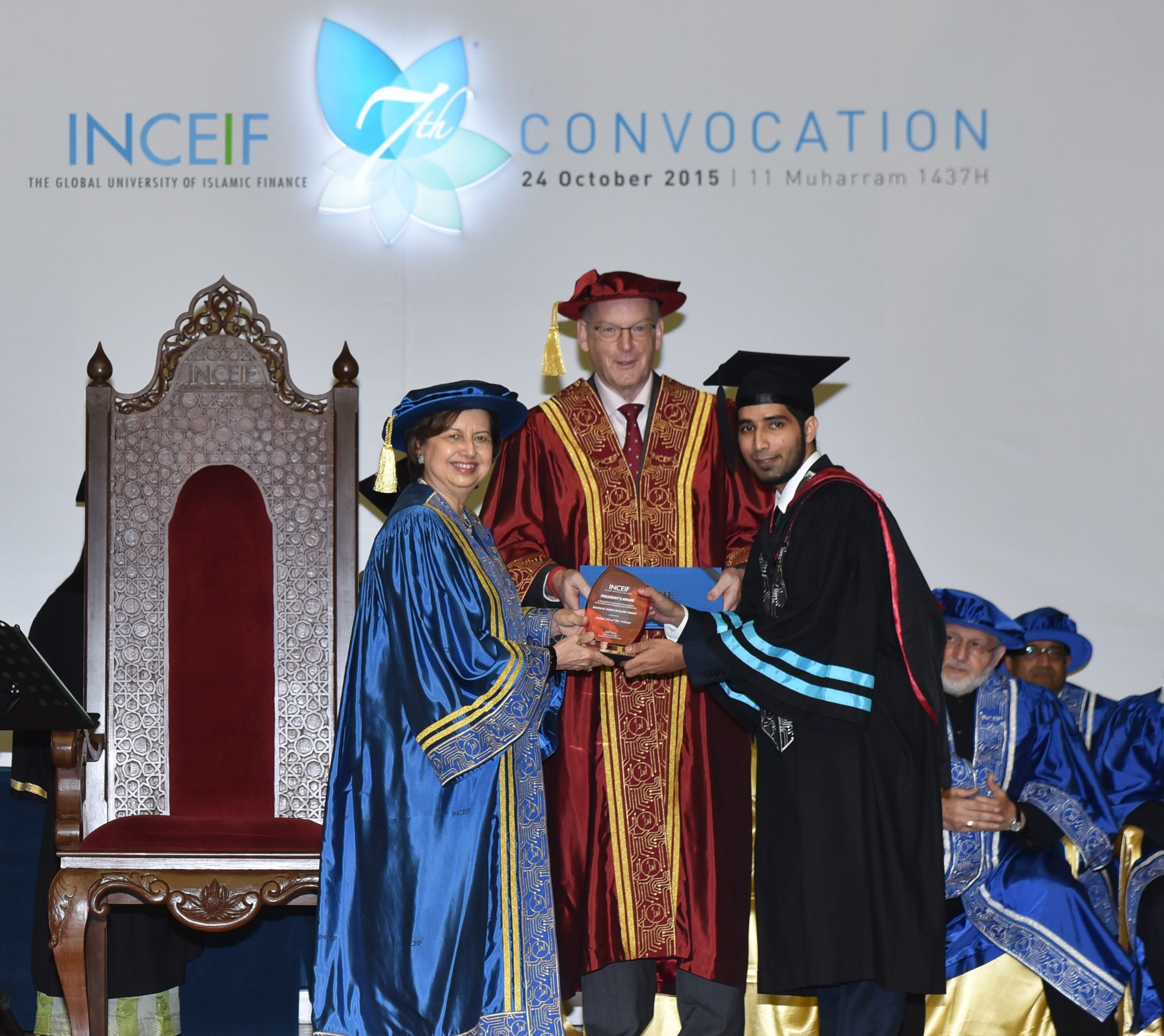 Kuala Lumpur, MALAYSIA – 24 October 2015– INCEIF – The Global University of Islamic Finance – today witnessed the graduation of 248 of its students at its 7th convocation, representing the university’s largest since its inception in 2007.  This year’s graduates comprise nations from around the world, attracted by INCEIF’s industry-ready syllabus and its partnerships with renowned Islamic finance institutions at home and abroad.

The graduates received their scrolls from INCEIF Chancellor, Tan Sri Dr. Zeti Akhtar Aziz at the convocation ceremony held in Kuala Lumpur, today. Among the guests at the ceremony were corporate leaders, policy makers and regulators who have contributed to the promotion and development of Islamic finance locally and globally.

Today’s graduation takes the number of INCEIF alumni to a total of 1,078. Since the inaugural convocation in 2009, a number of INCEIF alumni have been singled out to participate in or lead Islamic finance initiatives. Three INCEIF alumni contributed in the successful issuance of the USD1.5-billion dual-tranche Malaysian Government sukuk – an achievement INCEIF explained was indicative of the university’s culture of turning talented students into world-leading policy makers, central bankers, regulators, academicians and industry professionals.

Amongst this year’s graduates are students from Muslim-minority countries, including Canada, France, Norway, India, Japan and the United Kingdom. They are joined by graduates from Malaysia’s neighbouring countries as well as from Gulf and African nations. The increasing diversity of INCEIF students is a source of pride for the university. It affirms INCEIF’s role in developing world-class talent for the global Islamic financial services industry and puts Malaysia at the heart of this development.

Also graduating are five of the nine Maybank Islamic Bhd scholarship recipients to whom the bank awarded scholarships to study the Masters in Islamic Finance Practice at INCEIF. The scholarships represent part of a dedicated programme by Maybank Islamic to invest in the future of Islamic finance and Islamic banking, which includes rising talent within the markets it currently operates –Malaysia, Indonesia and Singapore.

Often in collaboration with its Sharia’h research arm, ISRA – the Islamic Sharia’h Research Academy for Islamic Finance – INCEIF’s pursuit of global excellence continues to transcend the classroom. In his address at the convocation ceremony, INCEIF President & CEO Mr. Daud Vicary Abdullah said  INCEIF is on track to obtain the Association to Advance Collegiate Schools of Business (AACSB) accreditation, which is the most renowned accreditation association of business schools, and includes revered institutions such as Harvard Business School and MIT Sloan School of Management.

INCEIF also announced that the World Bank has renewed its collaboration with the university for a further five years to focus on research in the field of risk sharing and poverty alleviation – two pivotal areas that have shaped global finance in recent times. Islamic finance is taking a lead to redress imbalances, ensure a fair, free and competitive banking culture and by providing a working framework for a risk-sharing financial system.

Mr. Daud, said: “The university’s programmes continue to expand our global footprint, and well beyond traditional shores. The increased participation of non-Muslim jurisdictions reflects the positive acceptance of Islamic finance among the global community.”

The global Islamic finance industry has witnessed a global resurgence over the past decade, with total assets currently estimated at US$2.1 trillion.[1] These investments largely take place on a cross-border basis, reinforcing the need for stronger trade and investment linkages, and regulations, between jurisdictions. Ernst & Young estimates that Islamic banking assets will grow by an average of 19.7% a year through to 2018 across the six most important markets for Islamic finance (QISMUT countries) – Qatar, Indonesia, Saudi Arabia, Malaysia, the UAE and Turkey.[2]

Mr. Daud said INCEIF is keen to focus on building its reputation as a global thought leader in Islamic finance. Earlier this year, INCEIF joined the first meeting of the UK Government’s Global Islamic Finance and Investment Group that is set to meet regularly to identify and address the critical factors that will drive the Islamic finance market in the City of London over the next 5 years. Additionally, the Thomson Reuters Islamic Finance Development Report indicated that 11% of global Islamic finance research output was from INCEIF & ISRA.

“In partnership with ISRA, INCEIF is playing an instrumental role in laying new foundations for governance and cross market connectivity, most recently at the Global Ethical Finance Forum where we led panel discussions on developing a financial system that supports sustainable economic development using Islamic finance to provide the ethical framework for banking,” added Mr. Daud.

Asked about the immediate future for INCEIF and the Islamic finance industry, Mr. Daud announced the launch of its Endowment Fund on 4th November to attract the support of everyone who shares the university’s vision for the industry’s future. Mr. Daud, said: “Put simply, we are making INCEIF the de facto Islamic finance university by industry, for industry, to help sustain its presence and influence as a force good for generations to come, and I would like to thank our students, alumni, staff and the global Islamic finance community at large for contributing enormously to our shared vision and shared success to date.”