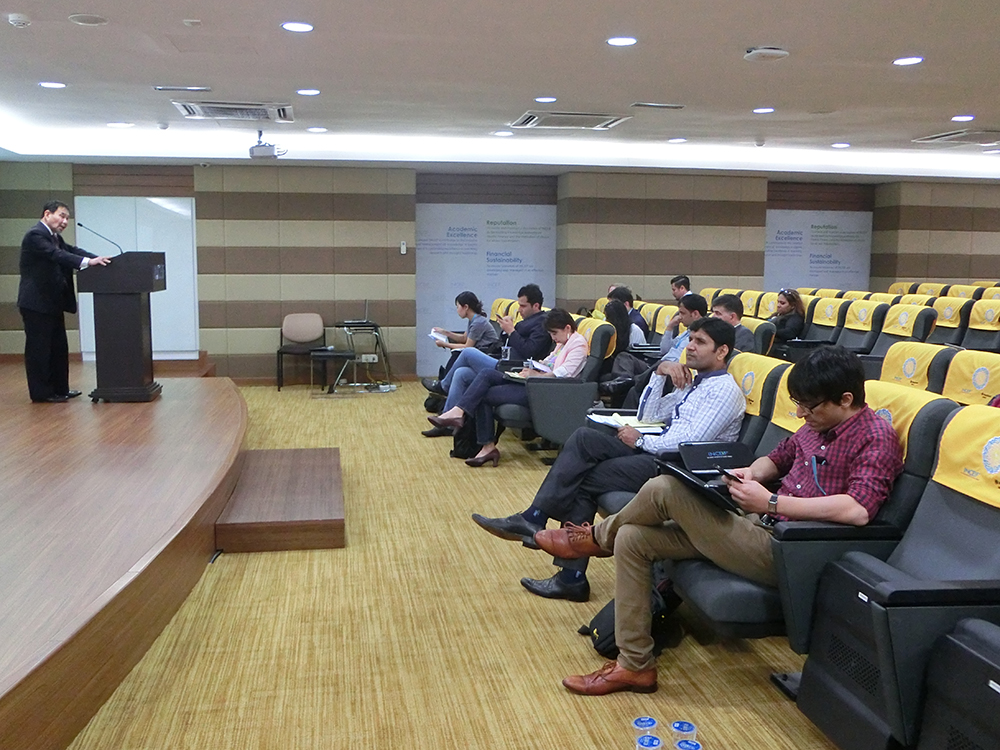 International journalists get quick lessons on IF at INCEIF

2 Sep, 2015, Kuala Lumpur: A group of 17 senior journalists from 12 countries had a brief yet meaningful discussion session on Islamic finance, specifically on banking, on campus today. The journalists, under the aegis of East-West Center, were given a quick lesson on Islamic finance and Malaysia’s position as one of the world’s leading hub for the industry by Deputy President Academic Datuk Prof Syed Othman Alhabshi.

Datuk Syed Othman was joined by School of Graduate Studies Deputy Dean Assistant Prof Dr Mohamed Eskandar Shah Mohd Rasid, Assoc Prof Dr Baharom Abdul Hamid and Assoc.Prof Dr Magda Ismail A. Mohsin for nearly an hour of Q-and-A with the journalists that centred on the basic principles of Islamic banking and economy as well as the salient points of the system against the conventional practices.

The journalists were from print and online publications and TV and radio stations from Afghanistan, China, Egypt, India, Iran, Iraq, Kuwait, Pakistan, Palestine, Philippines and the US. They included political and arts writers from mainstream media The New York Times, The Huffington Post and The Times of India as well as specialist publications such as Foreign Policy in Washington DC and Religion News Service in San Francisco.  Their visit to Kuala Lumpur was as part of the 2015 Senior Journalists Seminar which kicked off in Washington DC on 19 August and will end on 10 Sep, bringing the journalists to Nashville, Honolulu, Kuala Lumpur, Lahore and Islamabad.

Launched in 2003, the Senior Journalists Seminar is a 21-day professional dialogue, study, and travel programme intended to enhance media coverage and elevate the public debate regarding religion and its role in the public sphere, specifically as it concerns U.S. relations with the Muslim world. Designed for senior print, radio, broadcast, and online journalists from the U.S. and countries with substantial Muslim populations, the seminar offers an opportunity for participating journalists to engage their peers, experts, and the public on issues relevant to US relations with the Muslim world including religiosity and the impact of the media’s coverage of religion on public perception and international relations.