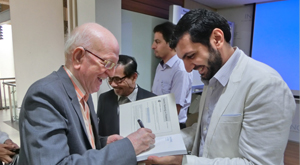 Speaking at the ceremony, INCEIF President & CEO Mr Daud Vicary Abdullah said: “The unstoppable energy of this accomplished author to share his knowledge with his colleagues, students and the general public through his writings is certainly a boost to INCEIF. “

Prof Zubair has extensively published books, articles and reviews in reputed academic journals worldwide. Some of these have been translated and published in languages other than English.

The 83-year-old joined the teaching profession in 1957 and has worked at a number of educational institutions in India before coming to Malaysia in 1990. In 2008, he joined INCEIF to teach Islamic economics.

In recognition of his accomplishments and tireless efforts in the promotion of Islamic economics as well as Islamic banking and finance, Prof Zubair was awarded the prestigious Islamic Development Bank (IDB) Prize in Islamic Economics in 2009.

Today is also a bittersweet event as INCEIF bids farewell to Prof Zubair. After 7 years of serving INCEIF, and 58 years of teaching, Prof Zubair is retiring.

From the bottom of our hearts, we thank Prof Zubair for his time and contribution to INCEIF.