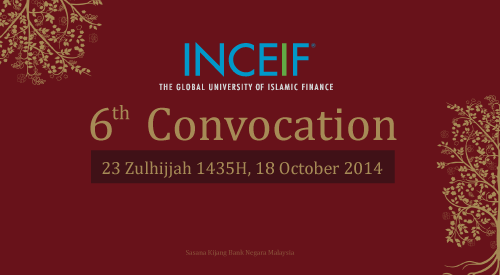 Amongst the graduates are students from Muslim-minority countries including Japan, France, India, United Kingdom, USA, South Korea and Philippine. They are joined by graduates from neighbouring countries of Singapore and Indonesia as well as from the Gulf and African countries.

The increasing diversity of INCEIF graduates reaffirms INCEIF’s role in developing world class talent for the global Islamic financial services industry. INCEIF graduates and students are not confined to geographical boundaries as they are also from different faiths and different academic and professional backgrounds.

At INCEIF’s 6th Convocation, Dr. Nazrol Kamil Mustaffa Kamil of Malaysia received the President’s Award as the best student for PhD in Islamic Finance programme. Dr. Nazrol enrolled in the PhD programme at INCEIF in 2010. After completing the coursework with CGPA of 3.95, he worked on his dissertation which was in the area of Shari’ah compliant stock, under the supervision of Prof. Dr. Obiyathulla Ismath Bacha and Prof. Dr. Mansur Masih. His research was in Islamic equities. He has won the best paper award at the annual Malaysian Finance Association (MFA) conference twice in a row and has a number of publications in refereed journals. He is currently serves as a faculty member of the Kulliyyah (Faculty) of Economics and Management Sciences, IIUM.

Mohammed Valli, from Johannesburg South Africa received the President’s Award as the best student for MIF for achieving the highest CGPA of 3.87. Mohammed Valli began his academic career with the memorisation of the Holy Qur’an, which he completed in 1999. His matriculation was in 2003, and enjoyed the accolade of being among the top achievers in the national matriculation examinations, with straight A’s and an aggregate of 95%. Consequently, he was elected to pursue his undergraduate studies in the field of Islamic Shari’ah Sciences, as well as Accounting and Auditing Sciences (BCompt). These qualifications were simultaneously obtained at Darul Uloom Zakariyya, a leading institute of Higher Islamic Studies in Johannesburg, and the University of South Africa (UNISA) respectively. Pursuant to this, during September 2012, with the support of his parents and a philanthropist in the South African Muslim community, he enrolled for the comprehensive Master in Islamic Finance (MIF) programme at INCEIF.

Another President’s Award was conferred to Shaiful Amri Husain from Kota Bharu, Kelantan as the best student for Chartered Islamic Finance Professional (CIFP). He graduated from University of Tasmania, Australia with Bachelor of Commerce majoring in Accountancy and Finance and later obtained the certification for internal auditing profession Certified Internal Auditor (known as ‘CIA’) awarded by The Institute of Internal Auditors (known as ‘IIA’). Presently, he is working at Kumpulan Wang Persaraan (Diperbadankan) (known as ‘KWAP’), a government agency managing the pension contributons and funds, as an Information Technology Internal Auditor.

In his speech at the convocation, INCEIF President & CEO Mr Daud Vicary Abdullah said for the coming year, INCEIF is keen to focus on building its reputation as a global thought leader in Islamic finance. Early this year, INCEIF joined the first meeting of the UK Government’s Global Islamic Finance and Investment Group that is set to meet regularly to identify and address the critical factors that will drive the Islamic finance market in the City of London over the next 5 years. Additionally, the Thomson Reuters Islamic Finance Development Report indicated that 11% of global Islamic finance research output was from INCEIF & ISRA.

Mr Daud said: “All these achievements have been made possible not only by the hard work and dedication of the students and Alumni but also by the INCEIF staff and the global financial community at large.”