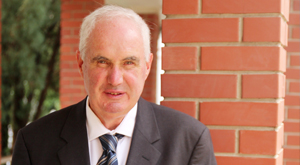 INCEIF is pleased to announce that our Professor of Banking & Finance, Emeritus Professor Dr. Rodney Wilson has been awarded the 1435H IDB Prize in Islamic Banking & Finance. Awarded by the Islamic Development Bank (IDB), the conferment is based on his accomplishments and tireless efforts in the promotion of Islamic banking and finance.

The award that comes with a cash prize of 15,000 Islamic Dinars (about US$23,500) and a citation will be presented at a special ceremony to be held in conjunction with the 39th IDB Board of Governors Annual Meeting in Jeddah, Saudi Arabia on 22 – 26 June 2014.

In the award letter, IDB Group President Dr Ahmed Mohamed Ali said IDB hopes that the prize would encourage more scholars in Europe and from around the world to devote their intellectual resources and work tirelessly for the promotion of Islamic banking, economics and finance.

Emeritus Prof Rodney Wilson joined INCEIF in March 2013.  He founded the Islamic finance programme in Durham University, UK and continues to serve as a member of the Durham Centre for Islamic Economics and Finance. He is also a Visiting Professor at Qatar Faculty of Islamic Studies.

He obtained his BSc and PhD from Queens University Belfast. He currently serves on the OECD Taskforce on Corporate Governance for Stock Exchanges in MENA Region (2011 – 2012). Previously he served on the Islamic Financial Services Board Working Group on Shariah Governance (2007- 2009), was a Consultant on Liquidity and Financial Stability at Qatar Central Bank (2010) and Consultant on Islamic Finance in North Africa to African Development Bank.

The IDB Prize, alternating between Islamic Economics and Islamic Banking & Finance, was established in 1988 to recognise, reward and encourage the activity of outstanding merit in promoting Islamic Economics, Banking and Finance. The Prize has been awarded to researchers, bankers, economists, Shariah scholars and institutions.

In 2012, Governor of Bank Negara Malaysia and Chancellor of INCEIF Tan Sri Dr. Zeti Akhtar Aziz received the IDB Prize in Islamic Banking and Finance 1433H award at the 37th IDB Board of Governors’ annual meeting. She was awarded the prize for her substantial contributions to the promotion of Islamic banking and finance as well as takaful infrastructure and Shariah governance framework in Malaysia and outside Malaysia. She was also credited for her invaluable services in supporting Islamic Financial Services Board (IFSB), the creation of INCEIF and ISRA, the setting up of Malaysia International Islamic Financial Centre (MIFC), and lately founding International Liquidity Management Corporation (ILMC) in Kuala Lumpur.