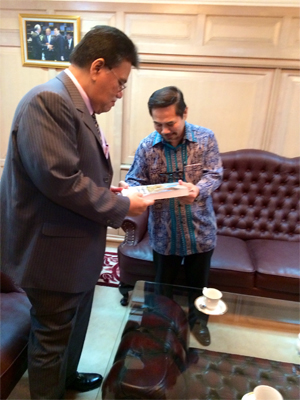 INCEIF Chief Academic Officer Datuk Syed Othman today called on Malaysian Ambassador in Indonesia HE Datuk Seri Zahrain Mohamed Hashim at the Embassy in Kuningan, Jakarta. Apart from introducing INCEIF to the newly appointed Ambassador, the meeting also proved fruitful to INCEIF in terms of gathering information on the demand for higher studies among Indonesians and specifically, the state of the Islamic finance industry in the world’s most populous Muslim nation.

Datuk Seri Zahrain said it was encouraging to see the positive image Indonesians have for Malaysian universities. Some 13,000 Indonesians are in Malaysia as students, from the diploma level to the PhD.

“We at the Embassy are always ready to assist Malaysian universities in promoting their programes in the Indonesian market, particularly as in the case of INCEIF which is offering a specialised filed that is currently getting increased interest,” he added.

Indonesians are among the top three foreign students at INCEIF. The interest to pursue higher education in Islamic finance among them is understandable as the country is home to the world’s largest Muslim population of 200 million.