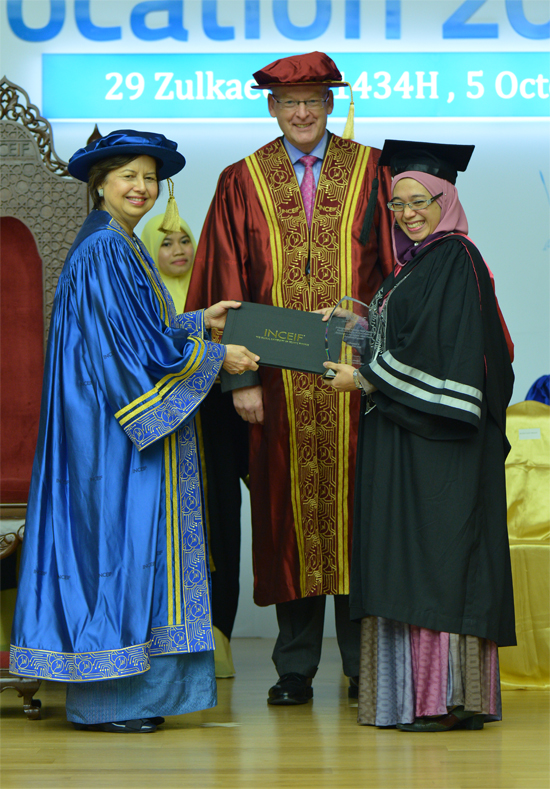 Amongst the graduates are students from Muslim-minority countries including Canada, China, France and USA. They are joined by graduates from neighbouring countries of Singapore, Pakistan and South Korea as well as from the Gulf and African countries.

The increasing diversity of INCEIF graduates reaffirms INCEIF’s role in developing world class talent for the global Islamic financial services industry. INCEIF graduates and students are not confined to geographical boundaries as they are also from different faiths and different academic and professional background.

At INCEIF’s 5th Convocation, Ms. Norlina Naem of Malaysia received the President’s Award as the best student for the CIFP programme. An accountancy graduate, Norlina is a staff of the Inland Revenue Board of Malaysia (IRB). Realising the increasing need for IRB to equip its staff with sufficient knowledge on Islamic finance, particularly those concerning taxation on Islamic finance businesses, IRB is encouraging its staff to further their knowledge in this area. Norlina, who is fully sponsored by IRB throughout her studies at INCEIF, has repaid her superiors faith in her by scoring straight As. She achieved all As in the 14 CIFP papers. In the near future, Norlina plans to join the Malaysian Tax Academy as a lecturer teaching Islamic finance with specialisation in takaful.

Chancellor presented a scroll to Ms. Norlina Naem from Malaysia received the President’s Award as the best student for the CIFP programme.

Syed Faiq Najeeb, from Pakistan, received the President’s Award as the best student for MIF for achieving the highest CGPA of 3.98. Faiq developed a passion for Islamic finance when he was working as a Research Assistant at University of Nottingham in Malaysia. Subsequently, he was awarded the Bank Negara Malaysia Scholarship to pursue his MIF at INCEIF. He completed the 24-month programme in a record 16 months. Currently, Faiq works with KFH Research Limited Malaysia as a Research Analyst with a portfolio of Islamic Finance.

Chancellor presented a scroll to Syed Faiq Najeeb, from Pakistan, received the President’s Award as the best student for MIF.

In his speech at the convocation, INCEIF President & CEO Mr Daud Vicary Abdullah said for the coming year, INCEIF is focused on achieving its Key Result Areas in academic excellence, reputation and financial sustainability.

Towards achieving academic excellence, INCEIF has started its journey in obtaining the Association to Advance Collegiate Schools of Business (AACSB) accreditation. AACSB is the most renowned accreditation association of business schools and includes the likes of INSEAD and MIT Sloan School of Management. The accreditation is important to INCEIF as the university benchmarks its academic programmes against the highest standards where business schools are concerned.

Mr Daud said: “Academic excellence and strong reputation will support us in delivering our third key result area which is financial stability. Towards that, the INCEIF Endowment Fund has been set up to receive endowment from industry and individuals to fund key activities for the industry. The fund would be used, among others, to further improve the quality of INCEIF academic programmes by investing in the best manpower and state-of-the-art facilities.”