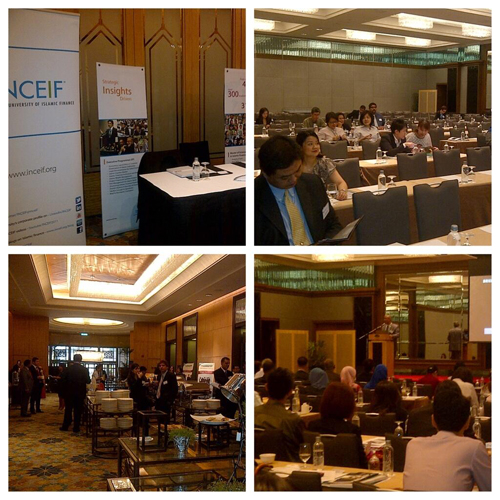 This special event is tailored to bring together leading senior-level corporate counsel, business leaders and private practice lawyers. The summit represented a unique opportunity to interact with some of the most active and influential lawyers from Malaysia, Asia and the rest of the world. A total of 150 participants had a platform for a frank exchange of expert views and the formulation of strategies to deal with opportunities in 2013 and beyond.

INCEIF was represented by Prof. Dr. Zainal Azam Abdul Rahman, Professor of Islamic Law and Head of Shariah & Legal Studies. He spoke on `Issues in the standardisation of the Shariah opinion’.

In his presentation, Prof Zainal said the absence of strict standardisation in Shariah laws and opinions on Islamic finance, caused by conflicting views from jurists of Islamic law, have often been claimed by some industry players as the stumbling block to its growth. Yet, the same people readily accepts that there are conflicting and multiplicity in the legal systems of the world and that various judicial decisions made in various jurisdictions are also appealable at various stages of trials in civil or conventional courts.

According to him, these same people shows respect to other systems of law, when they readily accept the pronouncement from that side without questioning its wisdom and appropriateness. Yet, the same respect or understanding is not accorded to Shariah law due to their lack of understanding or even less respect for the system.

“Are they not mindful of the fact that in today’s world there are many legal systems in operation in different parts of the globe with their salient features? Even within the boundary of a legal system based on English Common Law itself there are many variations. British law and American law originated from the same source i.e. the English common law, but the two are different in some respects. Even in Europe, everyone knows the distinctive features of the Continental legal system of mainland Europe as opposed to the system followed in England.

“So when it come to the different mazhabs (schools) in Islamic law (operating in different part of Muslim lands with varying degree of application) like the Hanbali, Shafie, Maliki and Hanafi for instance, why do these people feel that they are at liberty to say negative words about the Shariah system without proper comprehension? Do they know that the mazhab system is a form of standardisation effort tested over long period of time in Islamic history just like the multiplicity of the world legal system we have today?,” he asked.

According to Prof Zainal, the lack of understanding resulted, partly, from the fact that the Shariah system is not implemented in many parts of the world in a comprehensive manner for too long where people can see its beauty. In fact in many cases, even when the transactions have been structured based on Shariah principles and rules, they lack support from the legal system within which they are being practiced. In many cases, Islamic finance has been pursued within and subject to the conventional legal framework.

“Additionally, practitioners (many of whom are from conventional practice) are normally at lost to appreciate the underlying distinction between Islamic and conventional transactions. So the easiest thing they normally say in these circumstances is the phrase like `Shariah law is very confusing; it has so many views and opinions’,” said Prof Zainal.

The KL Summit also presented a comprehensive outlook of the latest regulatory developments in Malaysia, enabling participants to share best practices in the realm of law.